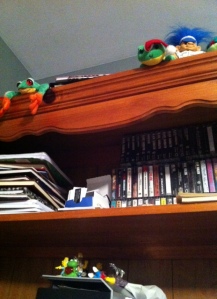 My most recent script of short stories is nearing completion. Tentative plan is to release “Throwing Dice” sometime this fall. There has been so much that I have learned in the process of writing satire.

I make no secret of the fact that I am not a stand-up comedian nor do I ever have a desire to be one. Because I am apparently funny to a few people, one of my writing goals was to write material for someone in stand-up. I have since had the privilege of writing a few lines for a recovering stand-up comic who makes a living as one of the best motivational speakers I have ever heard.

For years I have been very afraid to take chances. To be upfront, I am still hesitant to take chances with my own work. Anyone who follows me on Twitter @WriterDann will know this first hand because often I will post something then delete it minutes later. Call it a temporary panic attack. I might write something that is reasonable funny if it occurs to me. Maybe in reality it is a nervous habit.

This is going to come to a complete stop. A few times now I have heard from readers who have asked why I deleted a particular tweet, or why I removed something from Facebook because they enjoyed reading it and it gave them a chuckle. Writing of any kind is about taking a risk. No matter what the genre or format.

When I wrote “Planned UnParenthood Creating A Life Without Procreating”, it took much courage for me to put a book out there that was very personal and took a stand for a growing demographic, and under my own label. It all has been a wonderful risk that has been worth taking.

With this second book, it is another risk. My sense of humour draws from so many influences that I think readers will be able to see a nice variety in the pieces I have written. Many writers are very afraid to explore areas that may seem out of their comfort zones. Some copywriters will stick to writing content about only a few different subjects that they may be well versed in. Recently, I had the opportunity to write for a trade magazine about a subject I knew nothing about. For several days I was kind of on edge about whether I would be able to cross that threshold into a new area of work. Thankfully it went well and ended up being one of the most enjoyable assignments to date.

The other important risks worth taking is being able to say no to work when the time is right. During times when some writers are scrambling for assignments they may get a request from a potential client to have them complete a large assignment. Only to find out that the potential client wants to pay well below an acceptable rate.

Over a week ago, someone contacted me through this site with a fairly large work order for several hundred articles. This all sounded great at first until my rate query was answered. The potential client wanted to pay an equivalent to a penny per word. I replied promptly to the potential client that this was well below the rate that I would accept, and that they would have a hard time finding someone to produce quality work at that rate.

Everyone in this business takes a chance whenever they put something to paper or screen. A blog post, a tweet, a well-researched piece for trade publications, even a facebook status, all carry risk. If you think something is funny, chances are at least one other person will agree with you. So write it. If you have an idea that you might be able to use the next day, month, or year, find a place to record it.

William (Dann) Alexander is a freelance writer the author of “Planned UnParenthood Creating A Life Without Procreating” which is available at Amazon worldwide. http://amzn.to/PUJsmQ
Twitter @WriterDann