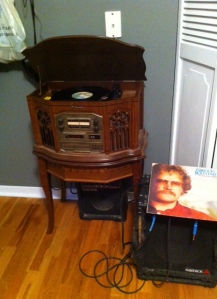 International Record Store Day drew attention to the glorious medium of music on records and the businesses that sell it.

I have been collecting records for a long time and it is something I enjoy immensely.  To me it is still the best method for listening to music. Rock and Roll Hall of Fame Inductee Stephen Stills even remarked in the last few years how significant a different vinyl is compared to today’s digital download. He claims the digital download only gives you 10% of the whole recorded story of the track. Maybe the other 90% of things are hard to miss but they are probably there. He would not just say this without some valid proof.

For a few years, I held on to 2 or 3 records down at my Dad’s old house just because he had something to play them on.  I was a dedicated customer at the long-gone Room 201 in Moncton New Brunswick. I found a long out-of-print death metal record there which I grabbed for the sake of making sure I would get it. It never was a priority at the time for me to buy a record player for myself. I would just listen on my Dad’s player if I felt like it.

But it was a job interview in Calgary that caused me to become a collector for life.

I interviewed at a company that sold all kinds of different flooring driving their forklift and picking orders in their warehouse. I remember wanting the job very badly because it paid well and the people seemed nice. A few days before the interview, I had visited a record store in the Kensington district called Hot Wax Records. I was just really happy to see so many different records available for reasonable prices.

For the better part of this interview, the manager managed to touch on music and we started to talk about records. I had told him about my visit to Hot Wax records the previous day.  He took a deep breath and asked me if I had ever been to RecordLand. Of course I had never heard of it at that point.  With a wonderful stream of enthusiasm, he proceeded to tell me all about this gem of a record store in the Inglewood district of Calgary. If there was something I wanted, chances are it was there.  Out-of-print? They probably had it. Even though I did not get the job we went on for nearly 45 minutes about this great store.

He was not kidding. When I first visited RecordLand, it became apparent that I needed to order a player compatible with my own stereo, pronto. Over $300.00 and a 3-month wait during which my original order had been broken in a warehouse, I had my first record player.

I returned to RecordLand soon after and started picking up whatever I could for music. All kinds of metal, classic rock and some jazz that I’ve always wanted to own. It may sound cliche but I really was like a kid at Christmas.

Long after I left Calgary I managed to pick up a handful of gems at garage sales and some E-Bay dealers that had great deals. Now that I live just outside of Halifax my preferred store of choice is Select Sounds in Bedford. On Saturday, April 19, 2014, International Record Store Day, I managed to deal in 3 inherited records out of my collection which I would never listen to.  In exchange for these lesser popular records and a buck, I was able to get a copy of Gordon Lightfoot’s “Endless Wire”. You can just see it peeking out in the photo above.

I love having the collection in my home office.  It provides a soundtrack while I work and gives me tremendous insight into the music. It is great that so many record companies now are still releasing some new music on this format. This is proof that vinyl will live forever in the hearts and minds of music fans. A whole generation of younger aficionados is emerging at record stores all over the world looking for the old and new classics to spin.

Vinyl records offer a historical perspective into old-school recording that digital formats cannot even come close to topping. If you have a collection, consider bringing it out and going through it. Look at what is there and ask yourself if you would really get rid of it? If you have a collection and a player and don’t use it, consider giving it to someone who will.