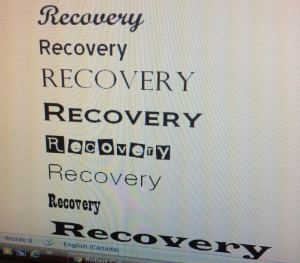 On April 25th this past spring, I was fortunate to have orthognathic (jaw) surgery at the Victoria General Hospital in nearby Halifax. Few complications aside, it was well worth it and I am very happy with the results. The difficult days of the recovery were well worth it. Procedure was moving of both jaws and genioplasty (chin adjustment) so everything would be more in line.

The first two weeks at home after surgery presented an interesting challenge. Those of us who can speak probably take that ability for granted. For two weeks I spent most of the time communicating the best way I could. Through writing. My jaws were wired shut with tight elastics so speaking was impossible. My Mom was generously at the house the first few days helping out with things so we were able to do some communicating in broken sign language we had learned from a generous former neighbour of ours. Through my iPhone, I did try to use the voice-over function. It was just proving too cumbersome. So most of the communication was through texts and the occasional email when it was called upon. It was very difficult to sit in front of a computer or look at my phone for any length of time. That has improved tremendously several weeks later.

There were some very difficult days during those first two weeks. Multiple trips to doctor’s office to deal with medication issues, difficulties with sleep and sustenance, but I made it with wonderful support.

Having to text things to my spouse and send emails to a few other people presented writing challenge. It was not something I thought much about until a few days of being at home. I wanted to do everything I possibly could to make life easier for those around me. Having that in front of mind forced me to really work at examining how I write texts and emails. Words needed to be chosen carefully so as not to frustrate the reader.

As recovery continued and I was able to speak, the extra attention to texts and emails seemed to improve. So in addition to recovering from major surgery, my writing received an inadvertent boost. It was a nice reminder to be aware of the words. To take extra care and caution with the phrasing. To keep getting better at writing in every single aspect of life.

Lastly, the recovery taught me to never take speaking or writing abilities for granted.