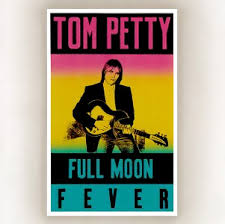 “I used to live in a two-room apartment,

Neighbours knockin on my wall,

Time were hard, I don’t wanna knock it,

This line is from “The Apartment Song” which appears on Tom Petty’s “Full Moon Fever”. I lived this very scenario on three different occasions. It always brings me back to the first apartment I had to myself in the hometown. It was this cozy tucked away apartment in an old-style home. The wall knocking was something no one needed to hear.

When my interest in bass was starting, there was another video of a musician picking on a bass that made me think it would be cool to play. Seeing Tom play along to the Traveling Wilbury’s “Handle With Care” had me ask the old man a question.

“Who’s the cool guy in the hat playing bass?”

Not long after seeing this video I saw the music video for “I Won’t Back Down”. Hearing that song as a kid knocked me out completely. It still does, all these years later. “Full Moon Fever” was released the following year after that first Traveling Wilburys record. Wore the tape out, bought another one to replace it. Still have it. Still listen to it regularly. From start to finish, the record is an absolute gem. It brought a sense of peace and normality to life when it seemed chaotic. You could easily lose yourself in the music while getting a feeling of relating to it. It carries almost all of the emotional elements music could offer. Start out by “Free Fallin” and close by Dancing at the “Zombie Zoo”.

Going into the 90’s, Petty’s release with the Heartbreakers of “Into The Great Wide Open” and another solo album “Wildflowers” (which featured most of the Heartbreakers as “session” musicians) would further add to the soundtrack of my life. As well as the lives of millions. Other releases found their way into my CD collection over the years. When I left home in 1999, there was so much going on in my personal life. A relationship had ended, things were strained with certain family, and work was non-existent. I needed to get the hell out of home. Tom’s music was a constant source of comfort and steady peace. There was this mix-tape put together which contained my favourite Tom Petty songs. It was always in my car, or sitting on top of a stereo. It went with me for many walks, powered by a Sony Sports Walkman. You know the kind. Yellow, bulky and waterproof.

I still have that tape somewhere.

More recently I’ve come to appreciate certain albums more that otherwise might be less-listened to such as 1999’s “Echo”. Many of the songs take a dive into the deep end of emotional turmoil and personal conflict. It was later that I would learn this was a significant period for Tom personally. In exploring that pain, he again gave his audience a voice. He repeated his masterful ability to bring people in and have them relate to his words.

It is his words that help define who he was to millions of us. As a writer I put him up there with Bob Dylan and Leonard Cohen as a great poet. When a person can be that expressive in their writing to such a level where millions of fans can connect with those words, you know it’s a formula that is generating results.

My condolences to Tom’s family, friends and band mates. We have truly lost one of the greatest songwriters ever. Through his work, we have truly gained a perspective on life that continues to help through highs and lows. We gained a connection back to ourselves and the world around us. We gained something we could relate to just by listening, singing along, sharing the gifts that Tom gave all of us.