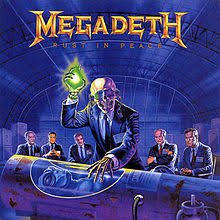 The name Megadeth defines one of the biggest thrash metal acts. Dave Mustaine and Dave Ellefson stand out as master commanders of their respective instruments.  Ellefson evolved over the years into a brilliant bassist with incredible timing, solid tone and a frantic attack keeping things solidified.  Mustaine has one of the most identifiable voices in metal and remains one of the strongest guitar players to develop heavy musical song portraits.

A used music store in Charlottetown, Prince Edward Island would lead me to getting a like-new copy of Rust In Peace on cassette.  By this time I owned nothing of Megadeth but appreciated hearing their music via Much Music’s metal show which I looked forward to watching. One of my best mates had a Megadeth tape on him the day we met at a bowling tournament. I always thought they were cool because the name pissed off parents and religious clergy who assumed it blasphemous. I recall someone once saying they encouraged young people to kill many on a “mega” level. Hence Mega, Deth…….

Very quickly this tape entered my regular rotation of favourite albums. It securely remains today in my list of top ten heavy metal records. The record’s lyrical themes explore conflict and the paranormal while leaving open to interpretation any specific singular message. “Holy Wars…The Punishment Due” is a track that forcefully addresses religion as being a central reason for conflict. Today, religion remains a dominating reason for conflicts because of extremism. Holy Wars is the perfect track to come blasting out of the speakers to start this album. Right away the musicianship is full on display. Mustaine and Marty Friedman prove perfect as a guitar pairing. They trade off leads with effortless-sounding energy. Arguably, this very album proved Mustaine to be one of the best lead guitar players in heavy music.

Holy Wars is followed-up by another Megadeth classic “Hangar 18”. The slamming guitar riff is a Mustaine-written chordal sequence penned during his Metallica days. The Metallica version of this riff would become “The Call of Ktulu”, the very last track Mustaine would get a writing credit for in his previous band. Hangar does this classic riff the justice it truly deserves. Mustaine and Friedman again trade blistering leads as if they were fighting for their identities as guitar players.

The third track “Take No Prisoners” is for me the best of the record. It is a heavy metal music symphony with vocals. It ends up becoming a showcase for all of the group. Dave Ellefson jumps into the lead fray with a perfectly timed bass run. Drummer Nick Menza’s thunderous hits would sound great just by themselves.

The album’s second last track “Dawn Patrol”, takes the album’s frantic pace down to heartbeat recovery mode before slamming into the final track “Rust in Peace… Polaris”. Dawn Patrol is a basic sounding drum pattern against a clever bass riff with words spoken by Dave Ellefson. The song’s bass part should be required learning of anyone studying heavy metal bass playing.

Rust In Peace stands as brilliant thrash metal in one of it’s finest recorded hours to date.

Despite it’s polished sound, Megadeth’s next record “Countdown To Extinction” would draw them even even more commercial and critical success. Rust In Peace will celebrate it’s 30th anniversary in September 2020. Fans remain optimistic that Dave Mustaine will fight his recent health diagnosis and be back to the stage to play the entire record with the band at a few shows around the globe.