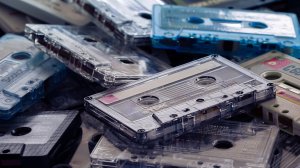 Through a lucky break, I was recently gifted a cassette player which was never used once for playing cassettes. Going to dig out what I have remaining of my tapes very soon.

A few years back, I condensed my collection down to less than a hundred. My music collection is mostly focused on vinyl. Still, these old pieces of enclosed plastic reels are great fun and another great way to reminisce through audio. Cassettes took effort. Many fingers were worn out by listeners repeatedly rewinding and fast-forwarding to their favourite tracks.

Then there were the mix tapes.

People made those tapes for themselves, for friends and romantic interests. Mainly it was for the music. As a youth who was into hard to obtain heavy metal, tapes were how the music spread around the world. Long before extreme metal could be found in smaller cities and towns, it was discovered through the underground tape-trading networks. Many of these extreme metal records were ordered through the mail by the same few people. Once word went around that they added certain items to their collections, others came knocking looking to dub them to blank tapes. Fans started to pick the best quality blank cassettes. Loyalties emerged to well-known brands like TDK, BASF and Maxell.

The most treasured tapes out of the bunch I have were sent to me by Motown Los Angeles studio session legend Carol Kaye. The tapes contain some of her isolated bass tracks from several songs she played on. There are clinic sessions and jam sessions where she shines through as one of the all-time greats of bass.

What tapes were your favourites? Was there a mix-tape you remember well? What was unique about it? Did you have a particular favourite brand of tape?

One thought on “Cassette Tapes”