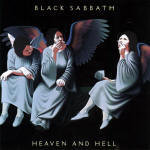 Ozzy Osbourne was gone from the band. Things were up in the air for guitarist Tony Iommi. Bassist Geezer Butler stepped away briefly, returning to record the bass for the album. Bill Ward was still in the picture with one foot out of the frame. (He would leave during the subsequent tour).

Ronnie James Dio, already a celebrated vocalist, would take over as frontman. His addition injected a breath of fresh air that the songwriting needed. The first song Dio and Iommi would write together from this record is the powerful “Children of The Sea”. It would mark the beginning of another celebrated era of the Black Sabbath catalog.

“Heaven and Hell” was my first introduction to Black Sabbath. I’m thankful that into my early teens the music would become part of my core. When I had the tape, I could listen to it no matter where it was at and never fast-forward to a particular song.

The album still stands as one of heavy metal’s greatest masterpieces. One of many perfect portraits of metal that would come from the Black Sabbath catalog. It would be followed up by another tour-de-force in “The Mob Rules”, which celebrates 40 years in 2021.